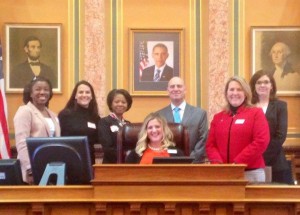 Though 30 cases of human trafficking in Iowa were reported in 2015, there are, on average, 150 teens trafficked in this state alone. That number can be five times higher during major events, including the Iowa State Fair and the Drake Relays – and often this crime flies under the radar.

Chief Justice Mark Cady has called for the Legislature to continue efforts to stop human trafficking in Iowa this year: “There is no justice when children are abused and exploited. A prompt, comprehensive and coordinated effort is need to identify victims of human trafficking and provide the services and protection they need.”

Human trafficking takes the form of modern-day slavery where people are profiting from the control and exploitation of others through labor or sexual trafficking. Foster teens who lack the stability of a stable home, can be more vulnerable to trafficking.

The Junior League chapters in Iowa believe legislative action must move from reactive to proactive with awareness programs in our communities, and training programs directed toward service providers and programs to assist “trafficking victims” in need.