The concept of Junior League was formed more than a century ago in New York by a group of concerned young women who wanted to contribute to their community in hopes of making it a better place to live. Today, the Association of Junior Leagues International (AJLI)  encompasses more than 294 autonomous Leagues with more than 190,000 members. Our local organization was founded as a service league in 1929 and officially became Junior League of Cedar Rapids in 1934.

JLCR was founded as a service league in 1929.  The group received its charter naming it Junior League of Cedar Rapids on Feb. 9, 1934. Currently, we are a diverse group of more than 300 active and sustaining members. 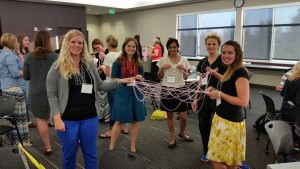 Our vision is to serve Cedar Rapids and the surrounding communities as a prominent source of female leaders for public and private service and as advocates for issues relating to women and children on a local, state, national and international level.  In the last 80 years JLCR has lead and implemented many service projects to help improve our community.  Below is a list of just a few: