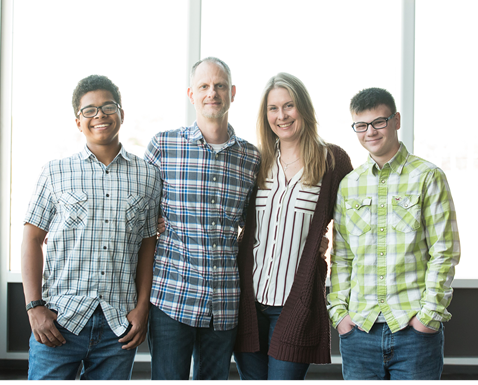 “You gotta learn as you go”

Matt and Amanda were not prepared to take in Jeremiah ten years ago. They had gone through the classes and had been contemplating opening their home, but never felt that the time was right. One night changed their lives forever. It was that fateful evening when DHS had called them multiple times to see if they would take young Jeremiah. After protesting all day long, the last call to plead with Matt and Amanda was to just open there home as an emergency temporary placement. They agreed that they would help temporarily.

When Jeremiah had arrived, they settled him in to get cleaned up and ready for dinner. Not having access to a shower for a while Jeremiah was pleased to do so. Amanda humbly explained, “I just made a quick dinner of sloppy-joes for him. He sat down and began thanking us over and over for his meal. We knew he must have been hungry but to thank us over and over was not necessary. We asked Jeremiah why he was thanking us so much.” Jeremiah explained to me, “This was my first meal that I ever had that did not have bugs in it.” Jeremiah at that time was almost nine years old.

Amanda and Matt told us that as soon as they heard those words, they knew this was not going to be temporary. Having adopted Jeremiah and their second adopted son Gage they can’t imagine life any other way. Gage is so grateful.

The Zhorne family have been fostering youth here in Cedar Rapids for almost eleven years. Matt and Amanda have a soft spot for the older youth in foster care.

They told us that a lot of people think that the older youth come with too much baggage or are not always as cooperative as the younger kids or babies.

Matt emphasized the need for the foster youth to be in homes where they can do fun normal activities with each other like other kids from school. He reminded us that as much as it was them opening their home, it is also as much as the kids opening their lives to being part of their story. Gage said, “It was like being given a second chance for a new life.” Jeremiah quickly added, “Yeah, you just learn as you go. There is not a before and after for us, we have been in the story the whole time.”